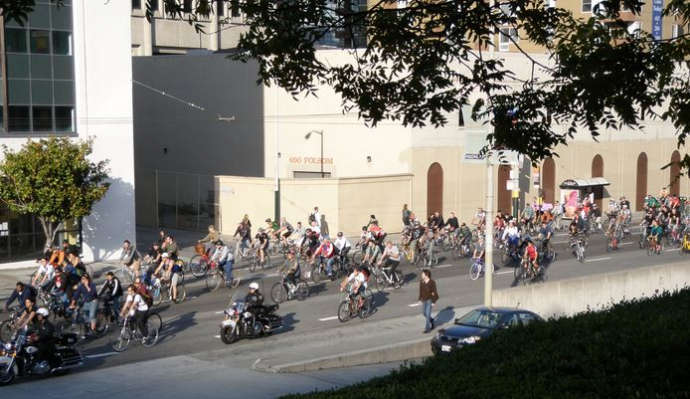 Riding a bike in amongst a group of cyclists so large that it dominates the road space around you is an experience you never forget – it’s a phenomena known as critical mass and it’s been used as a form of protest against car-centric town planning for over half a century.

The 1992 documentary about bike culture, Return of the Scorcher, explained how in China, motorists and bicyclists had a novel method of negotiating traffic junctions without traffic lights. Traffic would queue until the backlog reached a critical mass, at which point it would move through the intersection. The term caught the imagination of cycling campaigners in San Francisco and the modern Critical Mass movement was born.

Critical Mass events, which take place each month in cities around the world, call on councils, governments and road planners to properly and thoughtfully design-in the safety of all road users, including those who would prefer to walk and cycle, instead of prioritising motor traffic above all else.

Drum and bass on a bike

The DJ Dom Whiting didn’t set out to start his own version of Critical Mass when he installed decks on his cargo trike and took to social media to share his mobile drum and bass sets – he just wanted to provide a welcome distraction from lockdown, but that’s exactly what he’s done. His rides now attract many thousands and he’s been invited to share his love of music and cycling in other European cities. However, it would be wrong to think of his events as an exclusive club; people of all ages on bikes share the road with those on foot, on rollerblades, folk in wheelchairs and e-scooterists – all benefiting from low speeds and safety in numbers.