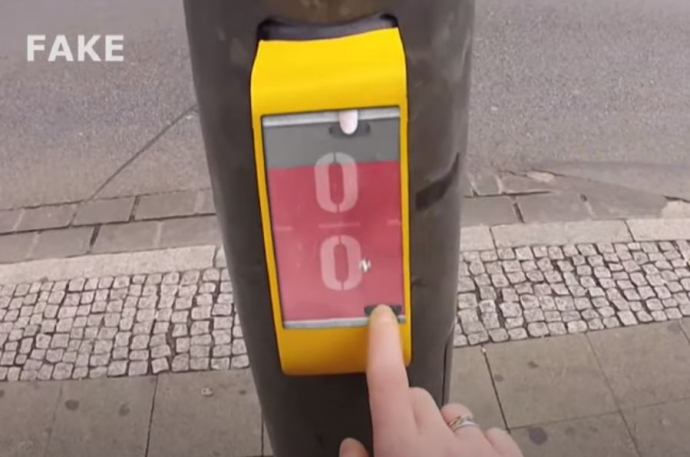 Have you ever become frustrated by the time it takes for the lights to change at a pelican crossing?

It’s an irritation that inspired the idea of upgrading the pelican crossing request button screen so as to make it possible to play Pong with a fellow pedestrian waiting opposite on the other side of the road. For the analogue among you, Pong was one of the world’s first computer games – a simple tennis-like game featuring two paddles and a ball.

A video of the pelican pong in action quickly went viral, but unfortunately it was fake.  That is until developers at Hildesheim University in Germany made it a reality.

The Pelican Pong was in place for only a month before it was removed, but sounds like a fascinating exploration into encouraging good-natured interaction between strangers – something that’s often lacking in urban areas.

An alternative to entertaining pedestrians waiting to cross the road is the altogether more practicable solution trialled recently at various locations across London.

In May 2021, TfL (Transport for London) installed ‘green person authority’ at 18 crossings across London. A continuous green signal to pedestrians is shown until a vehicle is detected approaching the crossing.

Data from the trial suggests that the pedestrian priority signals reduced journey times for people walking and made it easier and safer for them to cross. The average location involved in the trial displayed a green pedestrian signal for an extra 56 minutes a day. By reducing the waiting time for a green signal, the total time saved by all pedestrians at the average crossing in the trial was 1.3 hours a day.

We built our own pop-up zebra crossing

The result was a pop-up zebra crossing that could be erected in less than two minutes. And with no need to consider drainage, the excavation of existing pavement, disposal of material, new kerbing and paving, anti-skid surfacing, road markings, traffic signs, electrical connections and pillars, the total cost came to £50 – considerably less than the eye watering six-figure sum quoted by the Highways Agency.