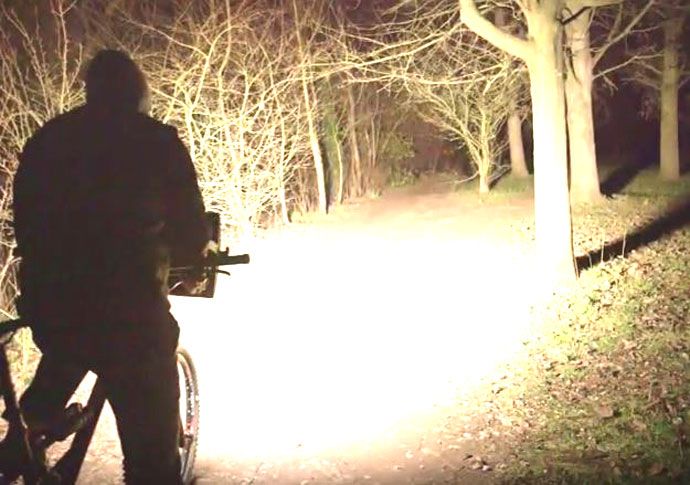 We might be tantalisingly close to the start of British Summer Time, but that hasn’t stopped one adventurous cyclist from equipping his MTB with the world’s most powerful bicycle light – a giant panel of LEDs producing 60,000 lumens.

See the bicycle light in action

Ian Laurie was part of the team in 2013 that conquered Mount Ventoux on a Boris Bike and now he has turned his attention to defeating the dark nights of the British winter.

The average car headlight produces 1,500 lumens, which is about the same power you’ll need to make good progress on a bicycle over flat or rolling off-road terrain. For top-speed and technical riding you may need to double that. However, even that degree of illumination was not enough for keen mountain biker Laurie.

Describing the experience of riding with his experimental light, Laurie told us: “The light performs perfectly for off-road riding – it’s fantastically powerful, but preserves peripheral vision as its beam has soft transitions and edges – the only downsides are its one-hour run time and the fact it’s too powerful to use when other people are around.”

How does your bicycle light compare?

New technology is fuelling a lighting arms race; the most powerful of the latest crop of LED, Xenon strobe and high-intensity discharge (HID) bicycle lights are rated at over 2000 lumens. By comparison, the typical halogen car headlamp produces around 1000 to 1500 lumens. However, road cyclists take note -research from America suggests the majority of collisions involving cyclists that occur at night happen when a rider is struck from the side. Despite the ever-increasing power of cycle lights, they illuminate mostly only the road ahead.

ETA cycle insurance offers a sympathetic policy on storage. For example, as long as a shed door is locked the bicycles stored within do not require any further security. In addition, the policy covers stolen quick-release components and for added peace of mind, claims are handled in-house. Furthermore, bikes are never devalued, no matter their age. Hardly surprising that The Good Shopping Guide voted us to be an ethical company like no other.