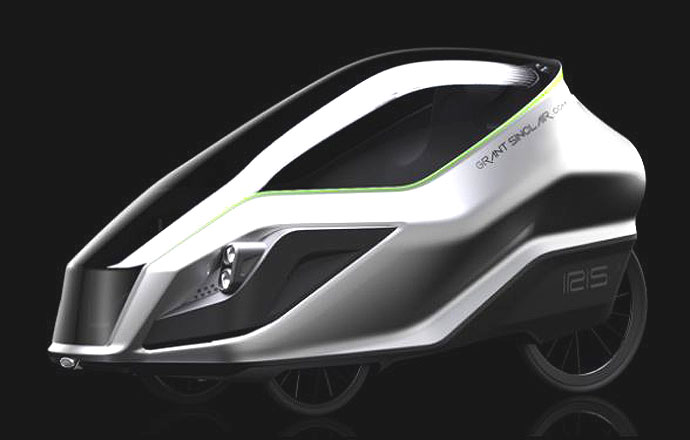 The Iris eTrike is an ultralight streamlined electric-assist vehicle with a cruising speed of 25 mph. The single-seat vehicle is the brainchild of Grant Sinclair, nephew of the man behind the infamous C5 electric trike. 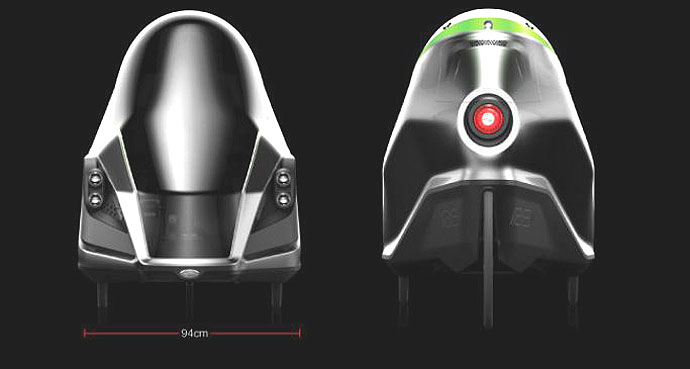 Is the world ready for efficient, healthy and environmentally friendly personal transport?

Grant Sinclair has addressed many of the criticisms levelled at his uncle’s invention thirty years ago. A chest-height profile, LED headlamps, indicators and brake lights aid visibility of the Iris eTrike on the road, and bodywork made from expanded polypropylene offers enhanced protection in the event of a crash.

The 250 w electric motor starts automatically when pedalling is detected and its slippery bodywork allows the Iris to travel over 30 miles on 5 pence of electricity.

The fully-enclosed Iris eTrike features a canopy made from aviation-grade acrylic and a handful of creature comforts including a body contoured seat, universal smartphone dock and a view of what’s going on behind via a built-in rear view camera. The £2,999 can be pre-ordered now via grantsinclair.com

The emergence of streamlined recumbent bikes and their superiority over conventional bicycles upset the body that oversees cycle racing to such an extent that it banned them. That was over 80 years ago, and the UCI is still cross with velomobiles for being faster and more efficient than upright cycles. The enduring ban on recumbents may well be tied up with the economics of racing: bicycle sport is big business and big business is a powerful lobbying force. Had the UCI taken a more open-minded approach to recumbent velomobiles, and some representatives of the racing body made the case a time that they should be embraced, it’s highly likely that many more cyclists today would recumbents.

It was against this chequered history that a British entrepreneur in the 1980s made a valiant attempt to bring a velomobile to the masses. If you’re old enough to remember the Sinclair C5, you’ll know the battery-powered recumbent trike became a byword for disaster. Like so many doomed projects across the ages, the C5 was ahead of its time – it assumed there was a market for a quiet and environmentally friendly vehicle that posed no threat to other cyclists and pedestrians.

The forward-thinking three-wheeler’s handling characteristics were praised by reviewers. The Guardian described it as ‘very easy to master once you have become familiar with the under-thigh handlebar steering and the semi-recumbent driving position with feet on bicycle-type pedals‘, while the Daily Express wrote that the C5 was ‘stable, comfortable and easy to handle‘.

However, motoring organisations and the health and safety lobby sealed the C5’s fate. The chairman of the British Safety Council (BSC) told the press: “I am shattered that within a few days 14-year-old children will be allowed to drive on the road in this Doodle Bug without a licence … without insurance and without any form of training.”

The British reaction to this brave attempt to revolutionise personal transport was to rubbish its innovation and then profit on its failure; arriving as it did at the height of Thatcherism, speculators were quick to buy up the bankrupt stock of C5s and then re-sell them to collectors at a 1,000 per cent markup. Let’s hope the same fate does not await the Iris eTrike.

On the face of it, one cycle insurance policy is much like another, but the devil is the detail. How much excess you will be charged is just one of the things that varies wildly between providers. Another is so called ‘new-for-old’ replacement – many insurers use this term, but if your bicycle is more than a few years old, they devalue it severely. This means you are left out of pocket when you come to replace it. Read our insider guide to cycle insurance.

For over 26 years we have been providing straightforward, affordable bicycle insurance. Whether you use your bike to commute, shop, race or amble in the park, ETA Cycle Insurance has you covered. We never devalue bikes no matter their age, allow you to buy your replacement bike wherever you like, replace stolen quick release components and handle claims in-house.