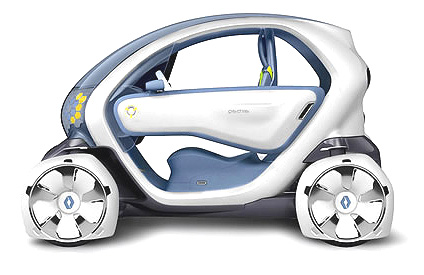 Renault has unveiled a two-seater electric car that at £6,000 would be the cheapest vehicle of its kind on the market.

The French car maker can afford to sell the vehicle at such a relatively low price because at less than 400kg, the Twizy is a micro car – officially referred to as a quadricycle. And unlike the approach taken by Nissan with its new electric family-sized Leaf car, Renault plans to lease the battery for the Twizy at less than £40 per month.

The Twizy will be offered with a twenty-horsepower motor or a five-horsepower version for those countries, like France, that allow low-powered micro cars to be driven without the need for a licence.

A spokesperson for the Environmental Transport Association (ETA) said: “Electric cars have very low day-to-day running costs, but the cost of the batteries make them unaffordable for most people. Renault is taking a creative approach to this problem by leasing the batteries for its electric cars such as the Zoe EV for around £60 per month, which is less than the cost of a tankful of petrol.”

What is a quadricycle? 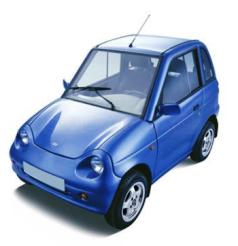 Sometimes referred to as a micro car, a quadricycle is a four-wheeled vehicle with an unladen mass not more than 400kg (excluding batteries if it is an electric vehicle) and whose maximum continuous rated power does not exceed 15 kW. The best known quadricycle is the G-Wiz.

What makes a safe car?

There appears to be reluctance by government to promote this type of vehicle because of concerns over safety; quadricycles are not eligible for the government’s £5,000 grant for electric cars. Lightweight micro-cars raise the question of what constitutes a ‘safe’ car.

There is a perception that large, heavy cars such as 4X4s are safe, but they pose an increased risk to pedestrians, cyclists and drivers of lighter cars in the event of a collision. Quadricycles on the other hand are designed to operate in urban areas at low speeds. According to Government figures, Greater Manchester has an average traffic speed of 12.1mph, Leicester 13.6mph, London 14.6mph, West Yorkshire 14.6mph, Merseyside 14.9mph, South Yorkshire 15mph and the West Midlands 15.5mph (Road Statistics 2008: Traffic, Speeds and Congestion).

The fact that quadricycles are lighter than conventional cars makes them less of a risk to pedestrians and less damaging to the road surface.