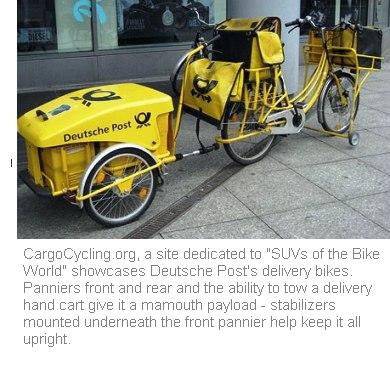 Royal Mail claims that increasingly heavy loads are the reason behind its decision to withdraw delivery bicycles in favour of diesel-powered vans.

An increase in the number of books and DVDs ordered through online retailers such as Amazon has increased the size and weight of post bags.

Paul Tolhurst, Royal Mail’s field operations director, this week wrote to David Willetts Universities and Science Secretary, who had been campaigning to keep postal workers on their bikes to say that delivery sacks may have to be abandoned completely because they had caused an increase in accidents: “This mail is, of course, heavier than the traditional letter and as our people carry heavier mail bags, we have to consider the practicality of using cycles and the long-term muscular and skeletal impact of placing up to 16kg on the shoulder at the same time.”

A spokesperson for the Environmental Transport Association (ETA) said: “Royal Mail is showing very little imagination as if they were to do a little research they would soon discover that there are bicycles designed to safely carry over 200kg of cargo. If they were to look to their counterpart organisation in Germany they would see these types of bike being put to good use.” 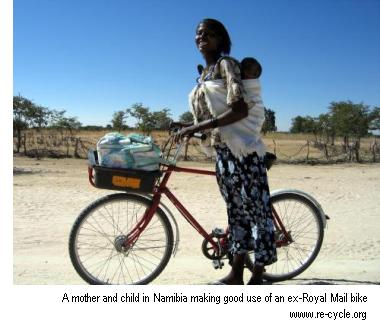 The decision by the Royal Mail to decommission its fleet of 16,000 Pashley delivery bicycles will not only increase it’s carbon footprint, but will have a detrimental effect on the on a charity that reconditions unwanted bikes before shipping them to Africa.

Bicycles are used by postmen on over 16,000 routes and the service has been in operation for nearly 120 years.

Historically, as bikes have completed their term of service they have been donated to one of a number of charities for refurbishment.

In 2009 Re~Cycle shipped 2,781 bikes to Ghana, South Africa, Namibia, Zambia and Kenya. However, of this number only 200 were former postman’s bikes, compared to over 2,000 in previous years.

Bicycle supply will dry up

The charity is expecting to receive a flood of bikes over the next two years as the Royal Mail fleet is broken up, but it will then lose the regular supply of strong, reliable bikes so favoured by its African partners.

A spokesperson for the Environmental Transport Association (ETA) said: “As urban areas wake up to the environmental, financial and health benefits of cycling, the Royal mail is putting its people into thousands of diesel vans.”

“The knock-on effect is that a valuable supply of bicycles for people in the developing world will dry up.”

Cycle insurance from the ETA includes new-for-old replacement, third party insurance (on any bicycle you ride), personal accident cover and if you breakdown, they will even come out and recover you and your bike.