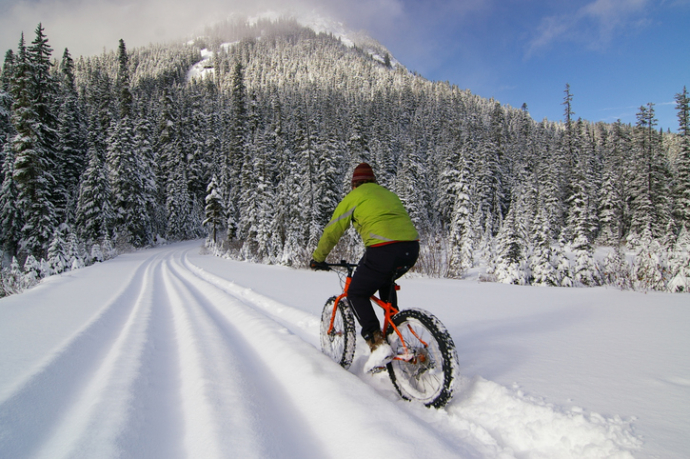 If you’re a hardy soul who cycles all year round, undaunted by cold weather, doff your cap to the pioneer adventure cyclists of the 1890s who took to the snowy wilds of northern Canada without the benefit of modern clothing and 80 years before the advent of mountain bikes.

It was not an endeavour for the fainthearted. More than half of those who made the journey died and only around 4,000 struck gold. The gold rushers usually bought dog teams and supplies to traverse the frozen wilderness of Yukon and Alaska, but those who were short of money used bicycles. 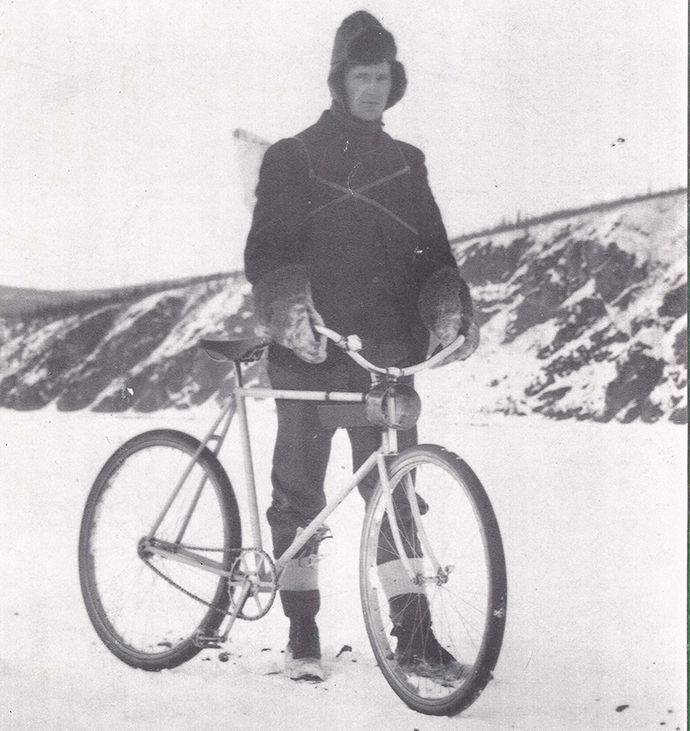 Hardy soul: The cover of Terrence Cole’s account of Alaskan cycling at the turn of the twentieth century, Wheels on Ice.

By following in the dogsled tracks the intrepid ‘wheelmen’ cyclists were able to make good time. The bicycles might have been cheaper to buy and maintain than a team of dogs, but they suffered from frozen bearings and tyres.

19-year-old Max Hirschberg chose to use a bicycle when he joined the gold rush in 1900. His journal gives a fascinating insight into the cold weather gear of the day:

“The day I left Dawson, March 2, 1900, was clear and crisp, 30° below zero. I was dressed in a flannel shirt, heavy fleece-lined overalls, a heavy mackinaw coat, a drill parka, two pairs of heavy woollen socks and felt high-top shoes, a fur cap that I pulled down over my ears, a fur nosepiece, plus fur gauntlet gloves. On the handlebars of the bicycle I strapped a large fur robe. Fastened to the springs, back of the seat, was a canvas sack containing a heavy shirt, socks, underwear, a diary in waterproof covering, pencils and several blocks of sulfur matches. In my pockets I carried a penknife and a watch. My poke held gold dust worth $1,500 and my purse contained silver and gold coins. Next to my skin around my waist I carried a belt with $20 gold pieces that had been stitched into it by my aunt in Youngstown, Ohio, before I left to go to the Klondike.”

Over the coming weeks Hirschberg faced numerous perils. Just short of his journey’s end, the intrepid cyclist skidded on ice and his bike’s chain snapped. Undaunted, Hirschberg took advantage of the bitterly cold tail wind to rig his bike with sail. He lashed a branch to his bike frame in place of a mast and his parka served in place of sail cloth. At times the wind was so strong that he was forced to drive into soft snow to stop his wild flight.

Canadian company KTrak sell a snow bike kit that replaces the front wheel of a mountain bike with a ski bade and its rear wheel with a caterpillar track. We tested a Ktrak bike at the SnoZone ski slope in Milton Keynes with mixed results…

The blade at the front works better than expected and there’s a good amount of grip from the rubber tank tracks, but there’s a weight penalty and all things considered the latest breed of bikes with 29” balloon winter tyres have better all-round off road ability in the winter.

With ETA cycle insurance, however old the bike, if it’s stolen you get enough to buy a new model. Furthermore, every cycle insurance policy you buy from us helps support the work of the ETA Trust, our charity campaigning for a cleaner and safer transport future. Little wonder The Good Shopping Guide has judged us to be Britain’s most ethical insurance company.