A new British design of bicycle called a paravelo that transforms into an easy-to-operate aircraft, requires no licence to ride or fly, soars to altitudes of 4,000ft and folds down small enough to store in the hallway, goes on sale today. 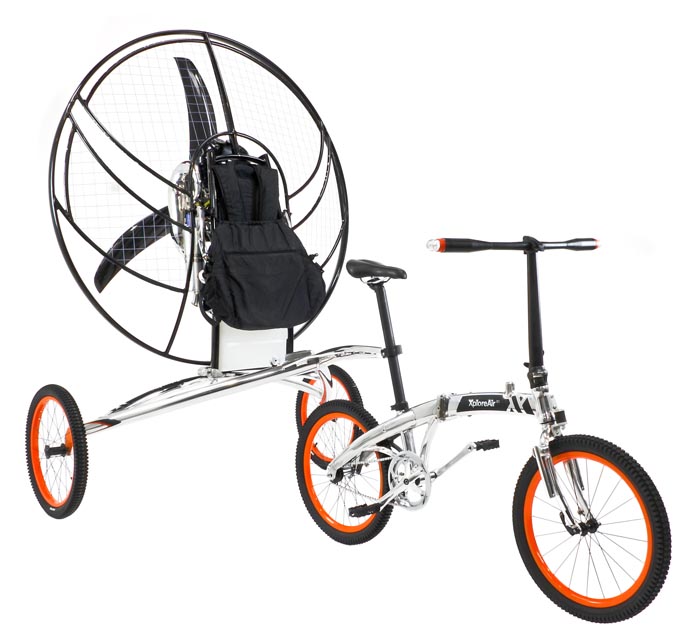 • Takes off from any open space and reaches 4,000ft
• Travels at 15 mph on land and 25 mph in the air
• Folds small enough to store in house or office
• Features a built-in tent for flamping (fly/camping)
• Heralds a new era of practical and affordable personal flight

The launch of the paravelo flying bicycle coincides with the start of both Green Transport Week and Bike Week.

How does it work?

At the heart of the design is a folding bicycle that tows a lightweight trailer carrying a powerful fan; the entire assembly is small and light enough to be carried into a house or office. 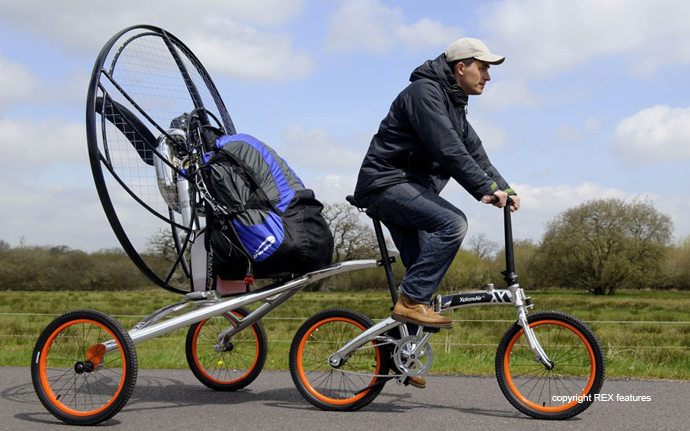 In order to fly, the bike docks with its trailer, a flexible wing is unfurled and an electric starter fires up the biofuel-powered 172cc motor.

The £10,000 paravelo has undergone successful test flights over the English countryside and promises to revolutionise the way we travel for work, leisure and adventure.

The paravelo can take-off from any piece of open ground clear of obstructions. Once airborne, it flies at 25mph for up to three hours at a time.

A built-in tent allows for longer journeys and makes possible flying and camping, or flamping as it has been dubbed. 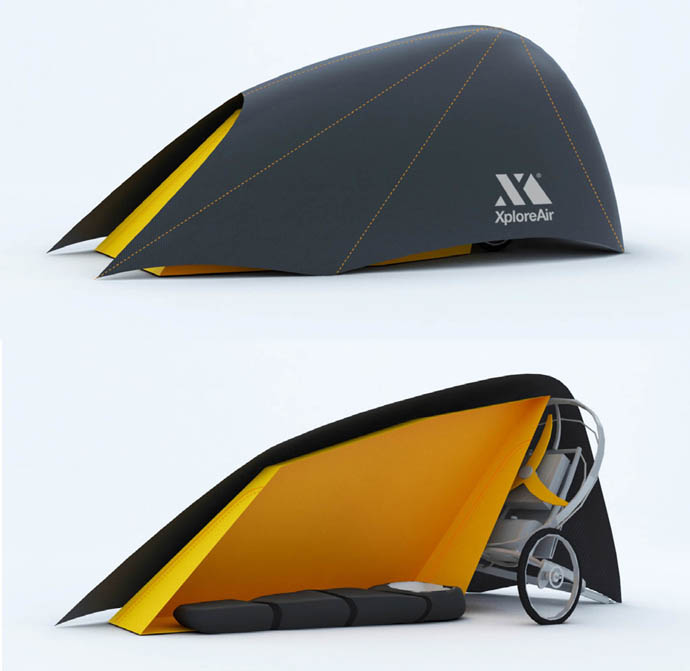 Why camp when you can flamp?

The launch of the paravelo coincides with the start of Green Transport Week 2013.

Director at the Environmental Transport Association (ETA), Andrew Davis, said: “For generations the car has been considered king, but for many more journeys it appears it now plays second fiddle to the flying bicycle.” 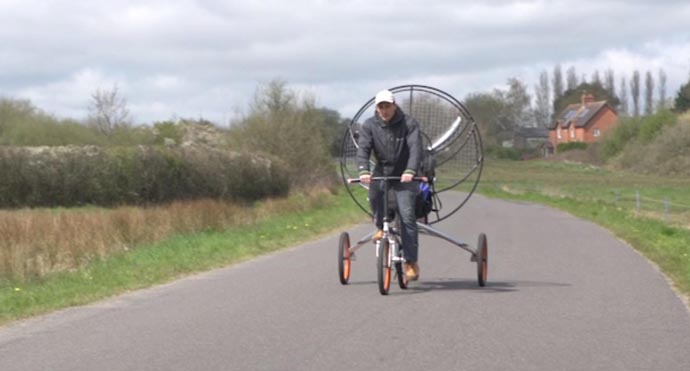 Who will buy it?

The purchase and running costs of the paravelo are less than those of a family car and no other aircraft offers such flexibility for city dwellers; the bicycle is small enough to be taken on the tube and the entire vehicle can carried up stairs to be stored in the hallway of a flat. As well as city commuters looking for weekend adventure, the flying bicycle has potential application as a highly autonomous and cost-effective aerial reconnaissance vehicle for forest rangers and border patrols etc. 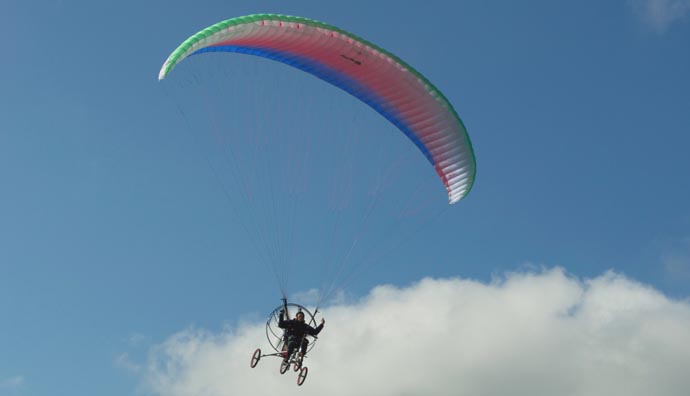 Co-designer of the flying bicycle, John Foden, said: “The Wright brothers were former bicycle mechanics so there’s a real connection between cycling and the birth of powered flight that’s recaptured in the spirit of the paravelo.”

Co-designer of the flying bicycle, Yannick Read, said: “If you have a thirst for adventure, but are without a storage space or bank balance large enough for a helicopter, then the paravelo is for you.”

One flying bicycle – 4 ways to use it:

1. Ride
Use bicycle on its own as you would any other bike. Fold it up to store or carry on the bus, train or metro.
2. Tow
Hitch the air frame trailer to the bike and you are ready for expedition, flight and adventure. Designed to carry the powerful motor, the air frame trailer also houses the wing, fuel and additional supplies you will need.
3. Fly
The bike docks with its air frame trailer to form a para-trike configuration for optimum expedition autonomy. In this set up you can carry with you all the equipment you need to ride, fly and camp. Alternatively, detach the bike and air frame trailer and wear the powerful fan on your back for a foot launch. This set up gives improved performance in the air and allows for take-off in higher and changeable wind conditions. In most territories, no licence is required to fly in this configuration.
4. Flamp
Use the optional tent to go flamping (fly / camping) Ride your bike out of the city, fly, pitch your tent. Detach the bike to explore or fetch supplies.

Unlike most insurers, ETA never devalue your bicycle if it’s stolen. It’s just one of the reasons they were voted to be an ethical company like no other by the Good Shopping Guide. Get an instant quote here