If a greater number of MPs and other opinion formers used bicycles it would boost cycling by encouraging others to follow suit, according to the organisers of this year’s All-Party Parliamentary Cycling Group bike ride.

The ride started at the London Eye and took a group of 120 riders on a trip around Westminster before finishing at the House of Lords.

A small number of MPs are regular cyclists, but the Palace of Westminster is overwhelmingly car-centric; bicycle parking spaces were last year removed to make more room for ministerial cars.

Covered bicycle racks in the Star Chamber Courtyard were removed and replaced by parking for Government ministers’ cars, many of which are left with their engines running for hours while they wait for their passengers, according to MPs who protested at the time. 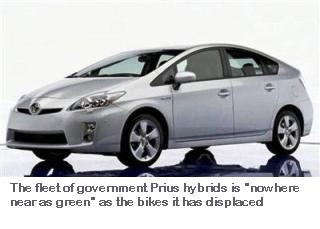 A spokesperson for the Environmental Transport Association (ETA) said: “When MPs use bicycles regularly they can have a powerful and positive effect on how it is perceived.”

Olympic gold medallist Victoria Pendleton last week urged Londoners to get back on bikes that might have been consigned to the garden shed – it is estimated that millions of cycles are languishing unused in this way.
“There are many people with a forlorn bike in a shed, and during Bike Week we want to fix them and get them on the road,” said Pendleton.

The scheme aims to get 10,000 bicycles back on the road and was launched along with MPs from various parties at the annual All Party Parliamentary Cycling Group bike ride.

Cycle insurance from the ETA includes new-for-old replacement and accidental damage (including at race events), £5m-worth of third party insurance (in the case of an accident you may need to seek compensation or even deal with a claim by someone else), personal accident cover and if you breakdown, they will even come out and get you.