Over 80 per cent of local authorities have reported that pavement parking is a widespread problem in their area.

The findings of the most recent government consultation on pavement parking confirmed that vulnerable pedestrians are most at risk, and in particular: people with visual impairments; people who use mobility aids, including guide dogs, wheelchairs, and mobility scooters; young children and people with prams and pushchairs.

A review of surveys carried out by organisations representing disabled people, as well as cycling and walking  provided evidence of pedestrians being injured or very nearly injured, because of vehicles parking on pavements. The surveys indicated that 95% of visually impaired people had had a problem with vehicles parked on pavements in the previous year. This figure rose to 98% of wheelchair users. A survey found that 32% of respondents with vision impairments were less willing to go out on their own because of pavement parking.

Pavement parking also has a negative financial impact on local authorities with one estimating that 10 to 20% of its pavement repair budget of £500,000 is spent repairing pavements damaged because of pavement parking each year.

The reluctance of government to deal with pavement parking may be due in part to lobbying by the motoring lobby. The AA described talk of a nationwide ban on pavement parking as ‘a step too far’ and a recipe for parking chaos. However, campaign groups are determined to see a change in the law.

To help keep the topic on the news agenda, we devised a fictional device designed to be installed along kerbs that quickly punctures tyres. 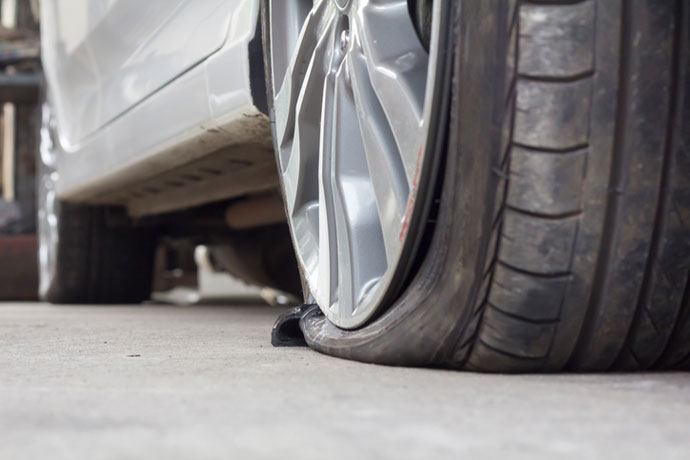 The Catclaw is an extreme idea that is unlikely to be practicable, or even legal. Other than the sharpened spike hidden within, what, you may ask, is it’s point. The purpose of the project is to highlight the plight of the 43 people killed last year on pavements in Britain by drivers and the many thousands of pedestrians every day who have their path blocked.

The Catclaw allowed us to talk at some length about the need to radically alter the way we tackle road danger in all its forms. The project appeared on television and in  The Daily Mail, The Express, The Mirror, Metro, The Manchester Evening News and been viewed over 135,000 times on YouTube.

With the exception of London – where a ban already exists – only lorries are currently prevented from parking on pavements. The solution to pavement parking isn’t endless consultations, public information campaigns or silly gimmicks, it’s a simple change to the law to allow local authorities to enforce the obvious: Pavements are for people.

The work of the ETA ranges from awareness-raising projects like the Catclaw and the documentary film above, to community roadshows promoting sustainable transport and helping schools mount protests to demand safer road crossings.

Supporting these projects is easy. Simply buy your home insurance, cycle insurance and breakdown cover  and you will be helping to fund these projects and many more besides. And you can rest assured that by choosing us you will not be compromising on quality or paying over the odds – we’ve been around for over 30 years and are rated as Britain’s most ethical choice by The Good Shopping Guide.