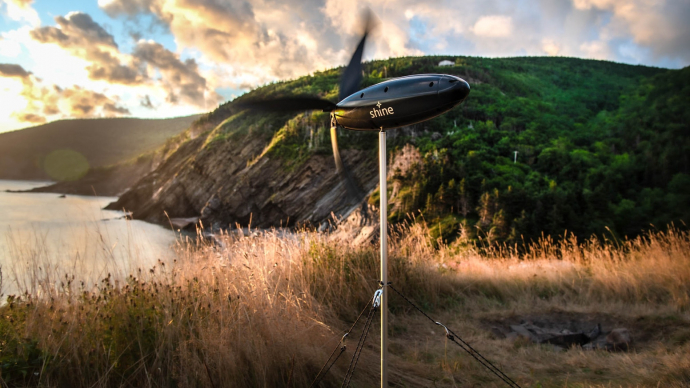 Who knows when, or if, travel will ever return to what we once regarded as normal. The pandemmic may have forced a slower pace of life, but the long term effect may be a diminished appetite for the cheap, unsustainable air travel. Perhaps we’ll see the current upsurge in domestic camping holidays become a trend. Maybe cycle touring trips will enjoy a renaissance.

In readiness for this type of rugged holiday making, we like the look of Shine – a new design of wind turbine that packs away to the size of a two-litre water bottle. Perfect for charging devices while out in the wild. 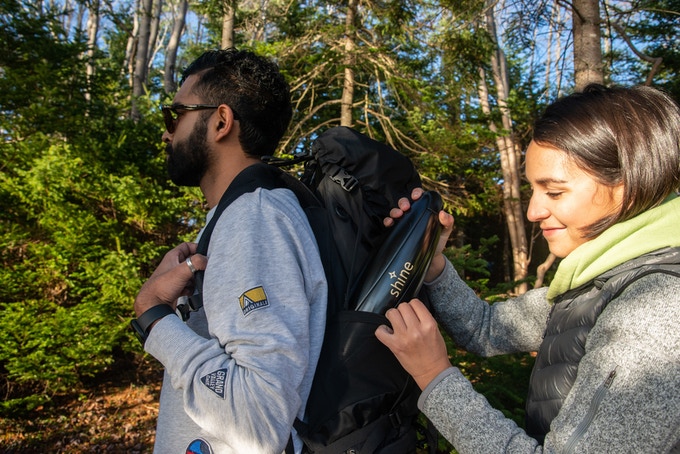 The Shine Turbine takes two minutes to set up and can operate in winds ranging in strength between 8-28 mph. A maximum output of 40W can be used to charge phones, laptops and lights or used to top up the internal 12,000 mAh Li-Ion battery for use later.  And once you’re done, all the portable wind turbine’s components store within its torpedo-shaped body.

The preoccupation here in the UK with cycling as a sport makes it easy to overlook the excitement and adventure offered by cycle touring – a pursuit as old as the bicycle itself.

Now reinvented as ‘bikepacking’ the business of setting off to ride and camp, taking with you only as much as you can carry, is as pure a cycling experience as you can have.

The excellent bikepacking.com describes ‘a synthesis of mountain biking and minimalist camping; it evokes the freedom of multi-day back-country hiking, with the range and thrill of riding a mountain bike. It’s about forging places less travelled, both near and afar, via single-track trails, gravel, and abandoned dirt roads, carrying only essential gear’.

We are led to believe that cycling is best enjoyed using new and, by extension, expensive gear, but this is far from the truth where cycle camping is concerned. Custom bags and ultralight camping gear are all well and good, but start with the bike you already own and envoke the spirit of the microadventure. The most recent bikepacking adventure chronicles an epic ride through the red deserts of the American west, but don’t let the lure of far flung destinations stop you starting with a short overnight route near home.

Cycle touring in Britain was at its most popular in the 1950s, but a renewed interest in camping over the last few years has seen clubs attract record numbers and an increasing number of people looking to holiday on their bikes. With the increase in popularity has come an influx of gadgets making questionable claims of making life easier.

Two of the day-to-day challenges facing the camping cyclist – carrying the least amount of equipment that is practicable and finding level ground on which to pitch their tent – are addressed by a pop-up tent which doubles up as a capacious trailer and incorporates levelling jacks.

With rudimentary suspension, the Bushtrekka trailer claims to be well suited to uneven terrain, but towing a trailer off road is another challenge in its own right. If you are feeling brave, why not build your own bicycle caravan?

If bikepacking seems like a hardship, you might be in the market for a QTvan – the ideal accessory for cyclists who demand the height of luxury on their camping trips. We built the tiny trailer five years ago to demonstrate the efficiency of the bicycle, but wouldn’t recommend it for anything more than local trips.

ETA cycle insurance offers a new-for-old for life – however old the bike, if it’s stolen you get enough to buy a new model. Furthermore, every cycle insurance policy you buy from us helps support the work of the ETA Trust, our charity campaigning for a cleaner, safer transport future.

For over 30 years we’ve been provided straightforward, affordable bicycle insurance. Whether you use your bike to commute, shop, race or amble in the park, ETA Cycle Insurance has you covered.