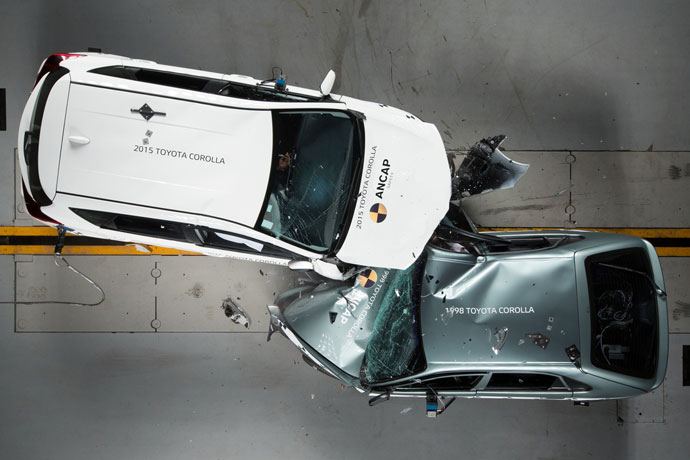 Older cars are dramatically over-represented in fatal crashes according to analysis conducted by engineers in Australia and released to coincide with the 4th United Nations’ Global Road Safety Week (8-14 May 2017).

The results of the research are dramatically illustrated by the photo at the top of the page, which replicates a 40 mph head-on crash between two Toyota Corolla cars – one from 1998 and the other from 2015.

According to ANCAP Chief Executive Officer, James Goodwin: “The older cars sustained catastrophic structural failure with dummy readings showing an extremely high risk of serious head, chest and leg injury to the driver. It achieved a score of just 0.40 out of 16 points – zero stars.”

“In contrast, the current model performed very well with a five star level of protection offered, scoring 12.93 out of 16 points.”

Safer, but only for some…

Safer roads are to be welcomed, but the crash-resistance of newer cars comes at a price –literally because only wealthier drivers can afford them and in a wider sense as motorists who feel cocooned may compensate for this reduced risk by driving less carefully. Of greater benefit to all road users, might be a speed limiters that capped the speed of every vehicle in urban areas to 20 mph.

The ETA has been rated ethical in Britain for the second year running by the Good Shopping Guide.

The ETA was established in 1990 as an ethical provider of green, reliable travel services. Twenty seven years on, we continue to offer cycle insurance, travel insurance and breakdown cover while putting concern for the environment at the heart of all we do.