Cycling groups around the country this winter have been left disappointed by the failure of their local authorities to grit cycle paths in treacherous icy conditions.

While road gritting machines have been out in force, cycle paths have been neglected on grounds of cost.

In an attempt to keep cyclists moving however cold it gets, cycle insurer The ETA has developed the world’s first pedal-powered gritter.

The Gritter Bike provides an environmentally friendly way to keep cycle paths and lanes passable over the winter; unlike the quad 4×4 vehicles used to perform the task elsewhere in Europe, the ETA’s pedal-powered design produces no emissions or noise. The gritter bicycle is capable of carrying 50 kg of salt and can be fitted with a snowplough if necessary.

A spokesperson for the ETA said: “There is no statutory requirement for councils to grit the cycle network, but bicycles are an increasingly popular way for commuters to travel, so it’s vital that lanes and paths are gritted when temperatures plummet.” 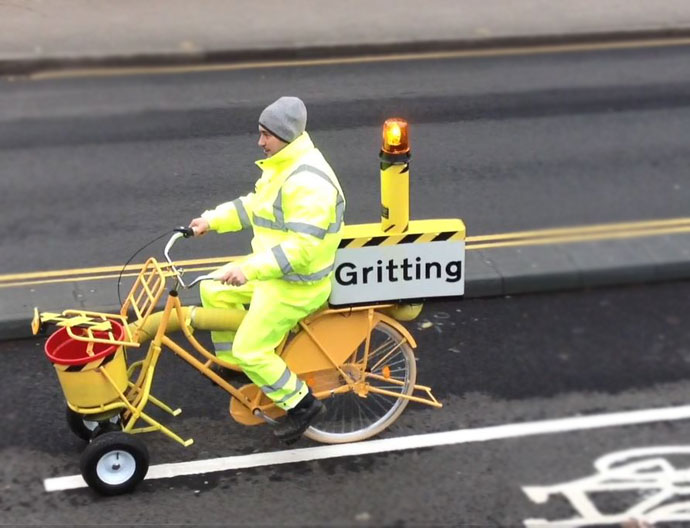 The gritter bicycle hard at work this week

For over 26 years we have been providing straightforward, affordable bicycle insurance. Whether you use your bike to commute, shop, race or amble in the park, and in whatever weather, ETA Cycle Insurance has you covered. We never devalue bikes no matter their age, allow you to buy your replacement bike wherever you like, replace stolen quick-release components and handle claims in-house.