The Hero RNT is a new design of diesel-powered motorcycle that promises to make powered two-wheelers an even more practical and environmentally friendly alternative to the car. 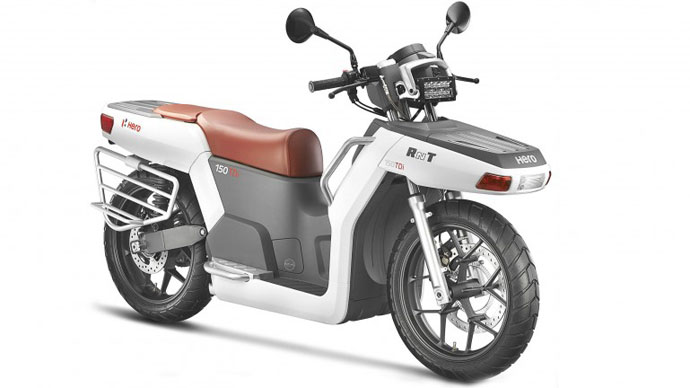 There are many situations when a motorcycle would benefit from a little power to the front wheel – not least when off road. The challenge with such arrangements has been the additional weight and complexity associated with transferring drive. The RNT aims to get around this problem by offering the option of an electric motor driving, and mounted within, the front wheel hub. The bike’s fitted with the electric motor will be capable of running on either diesel or electric power, or a two-wheel drive combination of the two. A further advantage of this hybrid arrangement is that it will allow the bike to run remit no exhaust emissions and noise in city centres

It is unusual for a motorcycle to be powered by diesel, despite the fuel’s advantages  This type of engine is frugal, dependable and, without modification, can run on biofuel made from used cooking oil. The 150cc diesel engine fitted in the RNT might not deliver a high top speed, but it produces more than enough grunt to carry the heavy loads it is designed to bear. Furthermore, the motor is designed to be used as a generator. In the developing world, it’s a capability that would allow the bike to power a water pump or emergency lighting.

Hero envisions the RNT diesel motorcycles as a sometimes tractor and has made provision for the attachment of ploughs and harvesters. The bike delivers 35 Nm of torque at just 1600 revolutions, which is just another way of saying that the engine doesn’t have to work strain in order to produce useful amounts of pulling power, but its efficacy as a lightweight tractor remains to be proved – at the very least, it will need tyres radically different from those fitted to the concept bike.

A feature that is both clever and practical – and that would prove as useful to a farmer in India as it would a commuter in New York, is the LED headlamp that can be quickly detached and used as a powerful torch.

Motorcyclists who use their vehicles for utility rather than leisure riding share a frustration with cyclists. Despite the fact that bikes the world over are used to carry significant loads, relatively few manufacturers make provision for the fact. The RNT has cargo platforms front and rear and extendable pannier frames designed to accommodate storage bins and other accessories.

The Hero RNT is an interesting concept and there is little doubt that there is a market around the world for a super-efficient diesel motorcycle, but whether other aspects of the bike’s design prove to be as practical as promised remains to be seen. The main obstacle in the path of the RNT is likely to be the millions of small capacity motorcycles that derive from the Honda Cub – the best selling powered vehicle in history.

Just as British families took to motorcycles during the austere post-war years, Asian countries have embraced small-engined bikes as a cheap and practical way of getting about. Small motorcycles of the type used in this country to deliver pizzas are as likely to be seen on Thai roads carrying bags of cement and ladders as they are transporting entire families – it’s not uncommon to see one carrying a family of four.

These small motorcycles are cheap, economical and durable. A 125cc Honda may not have two-wheel drive, but is 25 per cent lighter that the RNT and fitted with the correct tyres it is more than a match for many off road motorcycles when conditions get rough.