With many more bicycles on the road now the the cycling season is getting into full swing, a light-hearted guide for cyclists on how to deal with abuse from motorists suggests forgoing verbal retaliation in favour of psychological warfare. 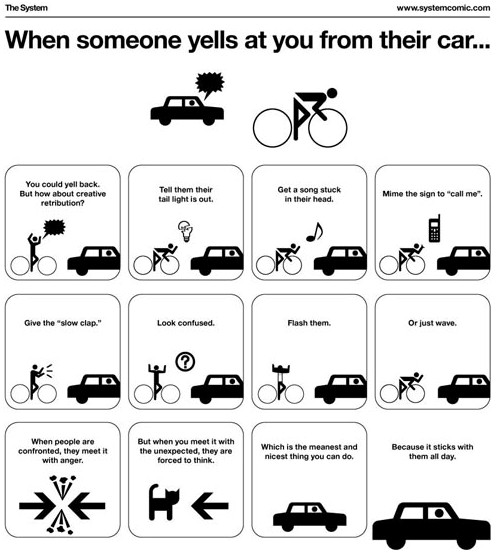 According to the guide, which is available as a guide at the excellent systemcomic.com :

When people are confronted they greet it with aggression, but when you meet it with the unexpected, they are forced to think. Which is the meanest (and nicest) thing you can do. Because it sticks with them all day. 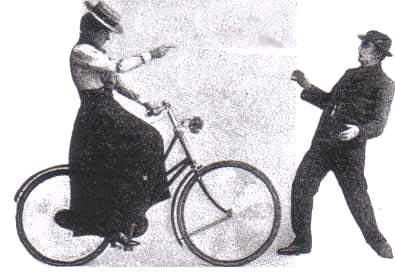 While it can feel like warfare when you cycle on the roads, the roads are a less violent place for cyclists than they once were.

According to an article in Pearson magazine (not to be confused with Pearson, the British bicycle brand still trading from the world’s first bike shop it opened150 years ago), the cyclist who is a skilful rider, who possesses pluck and dash, who has mastered the elementary rules of defence on a bicycle, and who is armed with a knowledge of how to use a machine to the best advantage as a weapon, may rest content that he is able to defend himself perfectly when attacked under the majority of likely conditions 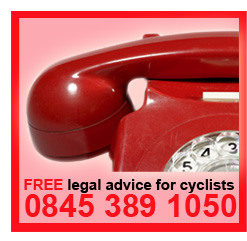 Whilst bicycle muggings in 21st century Britain do occur, victims are swiftly reimbursed if they hold a good cycle insurance policy and  cases remain incredibly rare. But in the late 1800s, all cyclists were wealthy and provided rich pickings for petty criminals.

Some of the techniques advised in the 1901 article, such as using the bicycle as a defensive shield, would be recognised by cycling police officers today, but modern-day cyclists looking for justice now spurn water pistols in favour of a specialist legal service.

Every cycle insurance policy from the ETA includes new-for-old replacement if your bike is stolen, cover for accidental damage (race events included), third party insurance (in the case of an accident you may need to seek compensation or even deal with a claim by someone else), personal accident cover and if you breakdown, we will even come out and recover you and your bike.