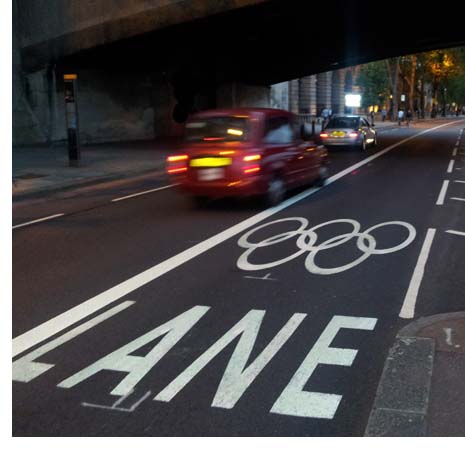 The decision to ban bicycles from over 95 per cent of London’s Games Lanes will put cyclists’ lives at risk, according to the ETA (Environmental Transport Association).

More than nine out of ten Games Lanes are situated on the outside of traffic queues, but cyclists will not be allowed to enter these ‘offside’ Games Lanes for what are described as ‘safety reasons’ – a policy at odds with national standards for cycle training and one described as potentially highly dangerous by the ETA.

From the TfL website: “As 95% of the Games Lanes are offside, and will be busy with Games Family traffic, they are unlikely to be the preferred position for cyclists.”

Cyclists who stray into the Games Lanes will face a fixed penalty of £130 and their bike will be impounded if they are unable to pay.

Director at the ETA, Andrew Davis, said: “Transport planners have wrongly assumed that the best place for bicycles on busy roads is hugging the gutter, but experienced cyclists know that the safest place to overtake slow-moving traffic is down the outside – slap bang where the Games Lanes are.”

In a statememt sent to the Guardian newspaper today from TfL Chief Operating Officer for Surface Transport, Garrett Emmerson, it is suggested that cyclists should sit in traffic queues rather than overtaking slow-moving traffic: “It is irresponsible to suggest that cyclists would be safer if allowed to cycle in the busy offside Games lanes. Experience in London shows that the majority of cyclists prefer to cycle positioned safely in the nearside lanes. In conditions of slow moving traffic, we encourage cyclists to avoid putting themselves in danger by staying safe and staying back.”

Spokesperson for the ETA, Yannick Read, said: “TfL chiefs must very rarely cycle in London to have wrongly assumed that the best place for bicycles on busy roads is hugging the gutter, or sitting at a standstill in traffic.”

The problem is particularly acute because the bus lanes that offer cyclists a refuge from London’s busiest traffic are to be removed on the roads affected by Games Lanes.

“With no bus lane to use and the Games Lane a no-go area for bicycles, a busy stretch such as the Marylebone Road will see cyclists forced to jostle for space with cars and lorries”.

With the exception of roads that cyclists are never permited to use, the ETA is calling for cyclists to be allowed to use all Games Lanes.