A study by the European Cyclists Federation (ECF) that compares the CO2 produced by cycling with other modes of transport concludes that Europe could reduce its overall emissions by one quarter if its population cycled as regularly as the Danes.

According to the report cycling is responsible for CO2 emissions of 21g per km. The calculations included emissions associated with production, maintenance and fuel. The figures were based on a heavy 19kg European-style town bike built using 14.6kg of aluminium, 3.7kg of steel and 1.6kg of rubber and the cost of producing the extra calories consumed by a cyclist rather than a motorist.

The report calculated that an average car produced 271g and a bus 101g.

In Denmark the average person cycles almost 600 miles each year – far more than the EU average of almost 120 miles per person per year and a total of 46 miles in Britain.

Why bother calculating the CO2 emissions of cycling?

Cycling is often cited as a zero-emission activity, but while this is true for air and noise pollution, the same cannot be said about cycling and greenhouse gas emissions. In accurately answering the question of how much pollution is produced by cycling relative to other modes of transport, the authors of the report believe that a robust case for placing cycling at the heart of transport policy. They acknowledge that the assumptions made about emissions resulting from manufacture and increased intake of calories mean that their figures are conservative and that the true figures for cycling are likely to be far less than 21g per km.

A spokesperson for the Environmental Transport Association (ETA) said: “Cycling is a simple, cost-effective and efficient way of reducing emissions, but headlines are more likely to be grabbed by the promise of electric cars.”

What makes cycling in Denmark different? 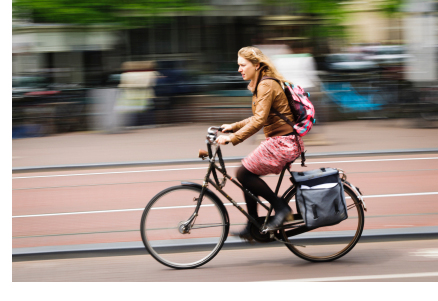 The first thing I noticed arriving in Denmark, although I had been warned, was that the Danes love their flag – it’s everywhere. Village after village was festooned with flags. Every house seems to have a flag pole.

The second thing was the number of cyclists. People of all ages on sit-up-and-beg bikes pootling about. People tell me that more people cycle in Denmark than here because Denmark is flat – okay Denmark isn’t hilly, but nor are most of our urban areas. So that reason doesn’t hold. It’s the weather then – no wrong again – Danes cycle in the snow at -10°C. I think the reason is because Denmark is more socially equal than Britain so you do not have to wear Lycra to ride a bike.

Cycling is regarded as just another mode of transport so it needs to be catered for just like any other. Consequently, the streets in Denmark tend to be designed for cyclists. No surprise that people cycle. It’s the layout and traffic rules that make the difference.
I noticed this starkly when crossing the border from Belgium to France – many cyclists in Belgium but few in France. The weather does not recognise boundaries and the terrain was the same. The only difference was the street layout. In Belgium the cyclist is catered for to a far greater extent than in France.

So that is what we need to do here. As cycling is even more efficient and green than walking, street layout should begin with the cycle then add walking, then motorised traffic. Such an aspiration is so far removed from current experience we should begin with the inner parts of our towns and cities – the area within 800m of the town centre.