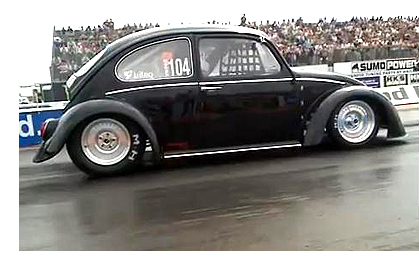 An increasing number of people no longer prepared to wait for high-performance electric sports cars are taking matters into their own hands and building their own.

Two brothers from Hungerford have spent the last eight years building an electric-powered dragster using a 1965 VW Beetle and parts from a milk float. Sam and Olly Young have now driven their creation, which they have named Black Current, into the record books as the first electric-powered car to go a quarter of a mile in under ten seconds.

The electric car-manufacturer Tesla now sells its £90,000 Roadster sports cars, but progress towards a mass-market electric vehicle that matches the performance of a petrol-driven equivalent is agonisingly slow.

A spokesperson for the Environmental Transport Association (ETA) said: “These vehicles are not intended to replace the family cars, but they are a triumph of ingenuity and dispel the myth that electric cars are little more than glorified milk floats.”

One man who is doing his utmost to champion the cause is John Wayland, an American engineer who has spent the last 15 years quietly developing a street-legal electric car that now regularly outpaces petrol-powered sports cars on the race track. The White Zombie car is built around an innocuous-looking 1972 Datsun and is powered by 60 batteries driving two motors from forklifts. It takes about 20 minutes to charge the car, and it has a range of 40 miles. Watch the car in action in this short film.