A new design of cycle helmet, which incorporates a long, flowing blonde wig and goes on sale this week, is scientifically proven to keep drivers from overtaking too close.

The Helmet Hair design, which is intended to be worn by both men and women, was inspired by cycle helmet research carried out by Bath University. The study revealed that car drivers leave less room when overtaking a cyclist wearing a helmet, but a much wider berth when passing a female rider with long hair. Drivers pass an average of 8.5 cm closer to cyclists with a conventional helmet than without.

As part of his research, traffic psychologist, Dr Walker donned a long wig to see whether there was any difference in passing distance when drivers thought they were overtaking what appeared to be a female cyclist. Whilst wearing the wig, drivers gave him an average of 14 centimetres more space when passing.

The Helmet Hair design draws on these findings to provide cyclists who choose, or are forced by legislation, to wear head protection the best of both worlds; the perceived benefit of wearing a helmet without the disadvantage of being overtaken too close by drivers.

Cycle insurance specialists, The Environmental Transport Association (ETA) is offering the radical ‘Helmet Hair’ design for £49.99 plus £4.99 postage & packaging. Helmet Hair is avialable in a variety of colours, but following extensive on-road testing it was found that the blonde hair design was the most effective at encouraging drivers to overtake safely. Orders can be placed by emailing marketing@eta.co.uk

Yannick Read at the Environmental Transport Association (ETA) said: “The launch of this revolutionary design is timely, and not simply because Northern Ireland has been considering making cycle helmets mandatory.”

“This may well be the most effective cycle helmet on the market – as a man I find it gets the attention of drivers far more effectively than the brightest high-visibility vest.” 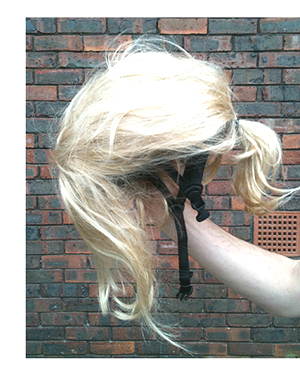 Drivers pass closer when overtaking cyclists wearing helmets than when overtaking bare-headed cyclists, increasing the risk of a collision, found Dr Ian Walker, a traffic psychologist from the University of Bath. He used a bicycle fitted with a computer and an ultrasonic distance sensor to record data from over 2,500 overtaking motorists in Salisbury and Bristol.

He found that drivers were as much as twice as likely to get particularly close to the bicycle when he was wearing the helmet. Across the board, drivers passed an average of 8.5 cm closer with the helmet than without.

Dr Walker suggests the reason drivers give less room to cyclists wearing helmets is down to how cyclists are perceived as a group.

“We know from research that many drivers see cyclists as a separate subculture, to which they don’t belong. As a result they hold stereotyped ideas about cyclists, often judging all riders by the yardstick of the Lycra-clad street-warrior. This may lead drivers to believe cyclists with helmets are more serious, experienced and predictable than those without. The idea that helmeted cyclists are more experienced and less likely to do something unexpected would explain why drivers leave less space when passing. 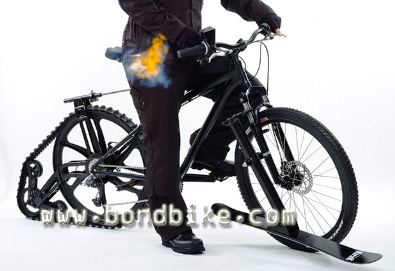 “In reality, there is no real reason to believe someone with a helmet is any more experienced than someone without.”

“The best answer is for different types of road user to understand each other better. Most adult cyclists know what it is like to drive a car, but relatively few motorists ride bicycles in traffic, and so don’t know the issues cyclists face.

The study also found that large vehicles, such as buses and trucks, passed considerably closer when overtaking cyclists than cars.

The average car passed 1.33 metres away from the bicycle, whereas the average truck got 19cm closer and the average bus 23cm closer.

In a poll conducted by the ETA last year, 52% of cyclists named ‘cars and lorries passing too close’ as their number one complaint, so the cycle insurance /insurance/cycle provider built a custom bike the handlebars of which were fitted with a specially-designed flame thrower to fire towards vehicles that got too close

Cycle insurance from the ETA includes, amongst other things, new-for-old, third party insurance cover, personal accident cover, race event cover and if you suffer a mechanical breakdown, they will come out and recover you and your bike.

Find out more and get an instant, no obligation quote below.