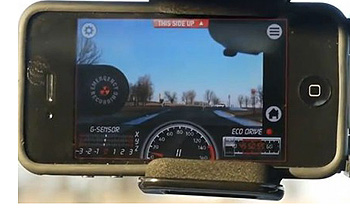 As the cost of car dashboard and cycle helmet-mounted cameras designed to record footage in the event of a collision continues to drop in price, a new iPhone app offers the technology for less than £1.

The iCar Black Box app constantly monitors speed, location and g-force, but saves footage only in the event of a collision. It is able to automatically call for emergency assistance.

The app is intended for use in cars, but in theory should work when mounted on bicycle handlebars using an appropriate mount.

Bicycle cam technology is now so cheap it seems certain to become increasingly popular among urban cyclists. It may even become incorporated cycle helmet design. There is no doubt that film footage can prove helpful in the event of a road traffic collision, but it is questionable whether the widespread adoption of in-vehicle cameras will improve the behaviour of road users.

There may even be a possibility that widely publicised footage of collision involving cyclists will reinforce the engrained idea that cycling in towns is dangerous. The BBC London news last night aired graphic cycle helmet cam footage showing a car pulling out in front of a cyclist, which resulted in a collision and rider being thrown from his bike. Such incidents are rare, but when, as was the case in the BBC report, they are presented without any mention of the many hundreds of thousands of event-free cycle trips undertaken each day in London, they serve as a highly-effective way of putting people off cycling.

Furthermore, incriminating footage is no guarantee that action will be taken against errant road users; a cyclist who late last year captured footage of a motorist threatening to kill him has been told by Hounslow Crown Prosecution Service that they plan to take no action.

Should you cause damage to another vehicle or person you are covered up to £5m by cycle insurance from the ETA. Every policy includes new-for-old replacement if your bike is stolen, cover for accidental damage (race events included), personal accident cover and worldwide cover. If you breakdown, they will even come out and recover you and your bike. From 33p per week.