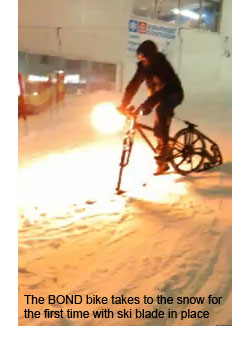 A short film of it on Youtube has already had 230,000 hits, but until now the B.O.N.D bike we unveiled at the Cycle Show last week has not been seen in its natural terrain, snow.

At the request of Channel Five’s Gadget Show we took the B.O.N.D bike to the incredible Sno!zone indoor ski slope earlier this week to test its snow-going capability and improved flamethrower.

The B.O.N.D bike has a number of unusual features:

Cycle insurance – what if I don’t have an ejector seat?

If your cycle is not fitted with an ejector seat to deal with bike thieves, worry not. Cycle insurance from the ETA includes new-for-old replacement if your bike is stolen, cover for accidental damage (race events inlcuded), third party insurance (in the case of an accident you may need to seek compensation or even deal with a claim by someone else), personal accident cover and if you breakdown, they will even come out and recover you and your bike. From 33p per week.