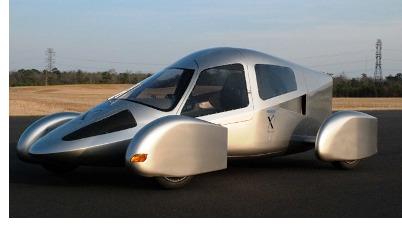 The Automotive X Prize, a competition to find the best super-efficient vehicles capable of 100mpg (or energy equivalent), has been won by the Edison 2 Very Light Car. This fuel efficiency equates to 120mpg imperial.

The Edison 2 four-seater design was today awarded the top $5m prize. The vehicle uses a rear-mounted, single-cylinder motorcycle engine running on a blend of 85 per cent ethanol and 15 per cent petrol to produce 40 horsepower.

In order to qualify for the main prize, vehicles had to have four wheels and be capable of carrying four people a distance of 200 miles on one load of their chosen fuel.

In addition, they had to be capable of accelerating from 0 to 60mph in 12 seconds and reaching a top speed of 100mph.

Best of the rest

The Alternative class, which was split into vehicles with two seats side-by-side and those with two seats in a tandem configuration was won by the electric-powered Wave II and the E-Tracer.

Studies on efficiency carried out by the Edison team led them away from the significant added weight of batteries needed for an electric or hybrid drive to a one-cylinder, 250cc internal combustion engine fueled by E85.

A spokesperson for the Environmental Transport Association (ETA) said: “The Edison is truly remarkable vehicle; a cheap and easy to build four-seater car that boasts 120mpg and a performance comparable with most city cars.”

What is the X-Prize?

The X Prize Foundation is associated with space travel because in 2004 it made headlines across the world when it awarded $10 million to the first private team to build and launch a spacecraft capable of carrying three people to 100km above the earth’s surface, twice within two weeks. It is now involved in many other areas…