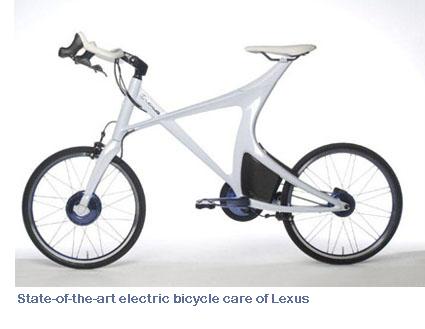 When Toyota entered the global market for luxury cars in the late 1980s with a new brand called Lexus, they relied on engineering excellence to take on heavyweight rivals Mercedes and BMW, and it’s an approach that the company has now applied to the electric bicycle.

Lexus has this week brought the electric concept bicycle to Britain for the first time, to publicise its sponsorship of the Great British Bike Ride, a four-day charity fun ride from Land’s End to London.

The future is electric (bicycles)

Media coverage of electric vehicles seems to focus almost exclusively on electric cars, even though there is currently not one mass-produced electric car available to buy. Meanwhile, electric bikes with reasonable performance, range and retail prices are available to buy now.

A spokesperson for the Environmental Transport Association (ETA) said: “The challenges facing the builders of electric cars are more easily overcome on bicycles, which are lightweight and not completely reliant on the battery for power. It also helps that they can be wheeled indoors and plugged in next to the kettle.”

Cycle insurance from the ETA includes new-for-old, cover for accidental damage, third party insurance, personal accident cover and if you breakdown, we will even come out and recover you and your bike.