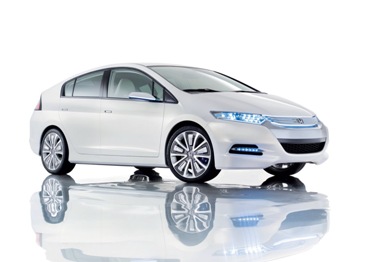 The Honda Insight, a new family-sized hybrid that is already providing stiff competition for the ubiquitous Toyota Prius, has been named Green Car of the Year 2009 by the Environmental Transport Association (ETA).

The least green car was found to be the 8-litre Dodge SRT-10 sports car. A year’s driving in the Dodge emits the same amount of CO2 as is absorbed by 322 mature trees – the equivalent of an acre of oak forest. *

The ETA examined over 1300 models of car currently on sale in Britain and compared their power, emissions, fuel efficiency and even the amount of noise they produce to create a definitive guide to buying the greenest vehicle.

A fully searchable database of the results will be published at www.greencarawards.co.uk on Wednesday 17th June 2009.

Best and worst in category

Andrew Davis, director at the ETA, said: “The discrepancy between the greenest and the least green cars in Britain today is striking, but the market is changing and a combination of consumer pressure alongside government leadership will result in an increasing choice of environmentally-sound cars.”

“The big problem is not the Dodge SRT-10s and Lamborghinis because there are not many of them on the road,” explains Andrew Davis, director of the ETA. “The concern is that people are continuing to buy cars that are much too big for their real needs. “

The popularity of large 4×4s like the Porsche Cayenne, which is many times more damaging to the environment than for example a BMW 320d, winner in the Large Family Car category, is already on the decrease; a new system of emissions-based road tax means owners of gas guzzlers pay over £400 per year.

“With the increasing costs of motoring and the threat to the environment there has never been a more important time to choose greener cars.”

Why do diesels do well in this survey?

Half an hour of sniffing diesel fumes in a busy city street is enough to induce a “stress response” in the brain, according to scientists who measured volunteers. The response continued to increase even after they had stopped breathing the fumes. There is speculation that the changes in the brain may trigger other body responses to diesel fumes, such as oxygen deprivation in the heart. Previous studies in rats have shown that minuscule soot particles can make their way directly to the brain via nerves in the nose.

There is a popular belief that because of their lower average CO2 emissions, diesels are better for the planet. Unfortunately it appears that it is people, particularly those in built-up areas that might be paying the price.

However, the advent of diesel particulate filters (DPF) such as fitted to some of the category winners heralds a dramatic improvement in the environmental rating of diesels. DPFs remove all trace of soot form the exhaust gases.

How many of these cars are eligible for the scrappage scheme?

Many of the most-polluting cars on British roads, and most of the worst-performing vehicles in this guide, are signed up for the government’s scrappage scheme, an initiative described as ‘green’ because it aims to replace older vehicles with new, fuel-efficient models. In theory it means someone who scraps a 1999 Volkswagen Lupo TDi 3L, (81g CO2/km) and buys a 2009 Bentley Arnage (465g CO2/km) would receive a £1,000 taxpayer-funded payment. The Bentley produces over 5 times as much CO2 as the smaller car.

How green is your car?