The number of people killed in car crashes has been falling recently. Improvements in car design, road layout and fewer miles driven have all helped.

The problem is that some type of crashes are not falling as fast as others. Whilst colliding with a lamp post is less likely to kill you – driving into tree still is. 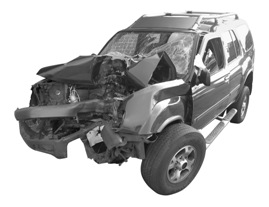 Modern cars are designed to absorb crash energy to reduce injury (the car might end up a mess but the occupants are now much safer). Modern lampposts are set back from the road, and depending on their location, they are designed to give way on impact and therefore reducing injuries to the car occupants. Trees do not give much at all.

Come off the road at speed and hit a mature oak and you are done for. The tree might lose a little bark but otherwise the trunk ends up encircled by the car.

There are people who believe that all trees by the roadside should be removed and others say that special higher crash barriers should be constructed to deflect cars away from frontal impact with trees.

However, new research on genetically modified elm trees has shown that a tree can be made to grow so its trunk gives way on impact. This in turn dramatically reduces injury and death. The trunk still retains the strength to carry the branches when in full leaf in windy conditions.

The research concentrated on growing a supple tree trunk rather than a trunk that would shatter. Although a trunk that shatters would reduce the initial impact, the secondary impact of the remainder of the tree landing on the car would prove fatal. On the other hand, the supple trees would have to have sufficient space behind them to allow to bend away from the impact. We could have them smash into a bedroom of a nearby house.

Clearly there is much more work to be done before these trees could be planted by the roadside. And it would take another hundred or more years before the trees achieved their full glory and maturity.

Another quicker and lower cost option would be to make drivers aware of what happens when a car collides with a tree. Focusing on better driving will save lives and make our streets safer for all users. 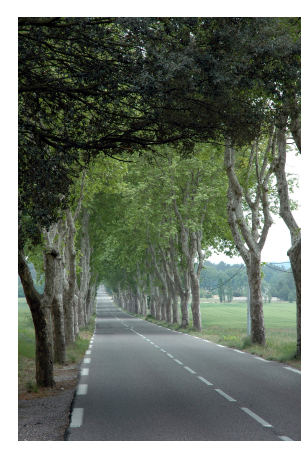 France is well known for its wonderful tree-lined national, but groups have occasionally taken matters into their own hands by illegally felling roadside trees at night.

According to an article in The Independent, Chantal Fauché, the president of the Association for the Protection of Road-side Trees, blames successive French governments for creating an anti-tree psychosis among road users: “The politicians prefer to cut down trees rather than take any real action against speeding and drinking, which are the real causes of deaths on the roads. If all the trees were cut down, the motorists and motorcyclists would collide with walls, or hedges, or road signs instead.”

The question of whether mature trees should be permitted at the roadside is not new. In 1970, President Georges Pompidou wrote: “France does not exist solely for people to drive around in cars. The requirements of road safety should not disfigure the French countryside.”