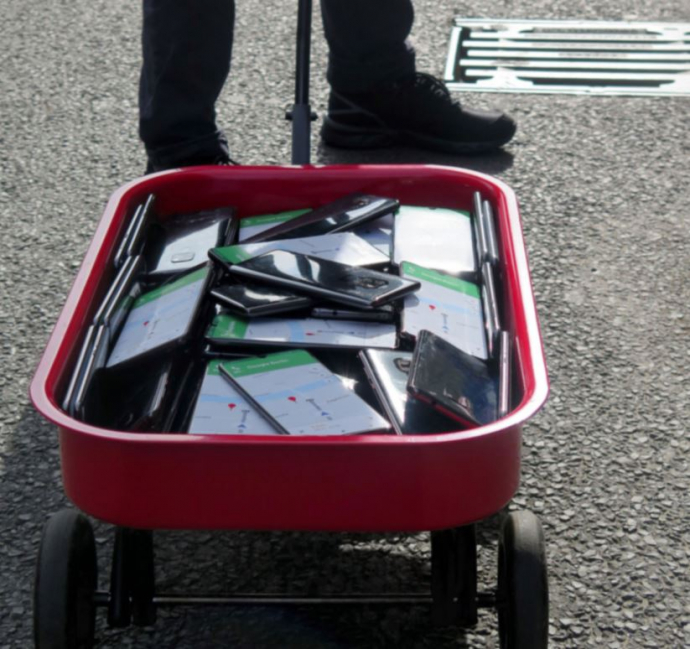 Over the last 50 years and more, Britain’s streets have been designed and built for cars. The resulting road danger has meant fewer journeys on foot or by bike, a loss of independence for kids and a contribution towards air pollution that kills 40,000 a year. And yet, even the Low Traffic Neighbourhoods (LTNs) implemented to redress these perils have themselves faced threat from the pro-driver lobby. Only this week, a Conservative-run council has scrapped a popular cycle lane after opposition from only 0.2% of the borough’s population. Kensington and Chelsea council in London will remove the separated cycle lane along Kensington High Street only seven weeks after it was installed.

In the face of such irrational governance, perhaps direct action is in order; just as the Dutch people protested in favour of LTNs in the early 70s, but with a modern twist.

Simon Weckert is an artist from Berlin with a focus on the digital world who has pioneered a high-tech way of gaming Google Maps and reducing congestion on local streets in the process. Weckert explains his work thus:

“With its Geo Tools, Google has created a platform that allows users and businesses to interact with maps in a novel way. This means that questions relating to power in the discourse of cartography have to be reformulated. But what is the relationship between the art of enabling and techniques of supervision, control and regulation in Google’s maps? Do these maps function as dispositive nets that determine the behaviour, opinions and images of living beings, exercising power and controlling knowledge? Maps, which themselves are the product of a combination of states of knowledge and states of power, have an inscribed power dispositive. Google’s simulation-based map and world models determine the actuality and perception of physical spaces and the development of action models.” simonweckert.com

The term liveable streets refers to streets and designed for people: no matter their age, ability or mode of transport. Weckert’s Google Maps hack offers a tantalising glimpse of liveable streets in areas otherwise dominated by cars.

The ETA was established in 1990 as an ethical provider of green, reliable travel services. Thirty years on, we continue to offer cycle insurance, travel insurance, breakdown cover  and home insurance while putting concern for the environment at the heart of all we do.