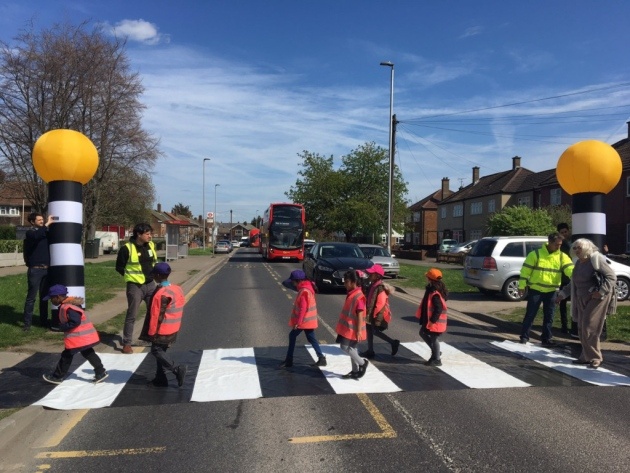 Walking and cycling commissioner of Greater Manchester Chris Boardman’s plans to paint zebra crossings on 20,000 of Manchester’s side streets to make pedestrian journeys safer have been stopped in their tracks by the Department for Transport.

The DfT says British law demands zebra crossings have zigzag markings, which can push the cost to well over £30,000. Boardman’s simple approach, which is used throughout Europe, costs only £300 for each crossing.

Boardman has also faced opposition from campaigners who suggest that ‘informal’ zebra crossings risk creating a ghetto for those on foot – reinforcing the mistaken belief that drivers have to give way to pedestrians only when there’s a side-street zebra. It’s a valid concern, but ever the pragmatist, Boardman as follows: 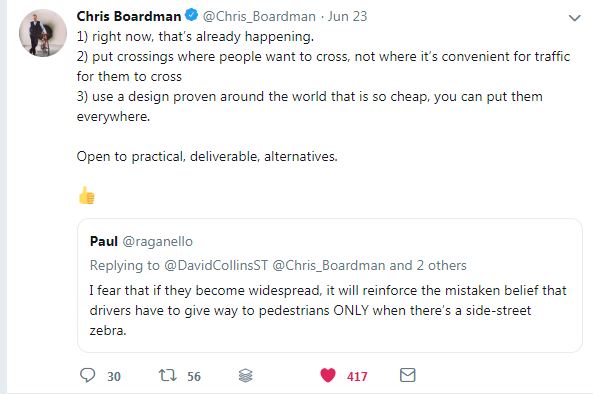 Boardman is proving himself to be a tenacious advocate for walking and cycling. Round one may have gone to the DfT, but watch this space – the battle is not over.

We are great fans of ‘informal’ zebra crossings. When we were approached by a group of parents in London whose request for a zebra crossing at a road traffic collision black spot outside their local infant school had been turned down on grounds of cost, we went about building one ourselves as cheaply as possible.

The result was a pop-up zebra crossing that could be erected in less than two minutes. And with no need to consider drainage, the excavation of existing pavement, disposal of material, new kerbing and paving, anti-skid surfacing, road markings, traffic signs, electrical connections and pillars, the total cost came to a fraction of the £114,000 quoted by the Highways Agency.

Not only are we named to be an ethical company like no other, we campaign for sustainable transport. Sometimes that means protesting until a school gets the zebra crossing they’ve been refused, or hosting 60 roadshows this year to encourage people out of their cars, or fixing bicycles for free. Supporting this work is easy – you simply have to take out our home insurance, cycle insurance, travel insurance and breakdown cover.