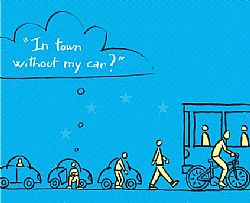 Motorists in over nineteen British towns and cities will on 22nd September leave their cars at home in favour of bicycles, trains and buses as part of Car Free Day, a now global event that was first organised in Britain by the Environmental Transport Association (ETA).

World Car Free Day, or ‘In town without my car day’ as it is also referred to in Britain, takes place every year on 22nd September as an international celebration of environmentally-sensitive transport.

The event this year will involve over 2000 towns and cities in 38 countries around the world.

A spokesperson for the Environmental Transport Association (ETA) said: “The number of cars and urban traffic is constantly increasing, and the associated noise, air pollution and stress is eroding the quality of life of urban dwellers. Car Free Day focuses on highlighting alternatives to car travel, the rights of pedestrians and cyclists, and the need for more and better public transport.”

“We do not want to put cars on trial or to condemn the desire for mobility – the idea is to reconsider urban transport with the prospect of sharing streets more efficiently.”

The history of Car Free Day

Air pollution and problems with urban commuting are of great concern to people today. European surveys have shown that over six people in ten say that automobile traffic in the city is unbearable. Nine out of ten people believe that increasing public transport is a priority in combating air pollution and seven out of ten say they support a ban on car traffic in the centre of cities on certain days. However, at the same time, the number of cars and urban traffic is constantly increasing, eroding the quality of life of urban dwellers with the increase in noise, air pollution, stress, etc.

Car Free Day on 22 September every year is part of an approach aimed at reclaiming cities and represents an important chance for dialogue. It focuses on raising the awareness of urban dwellers with respect to nuisances caused by the use of private cars in the city (air pollution, noise, etc.). It also stresses the rights of pedestrians and cyclists, the need for more and better public transport, and helps people rediscover their local architectural heritage.

Those planning to take part in World Car free Day 2010 can now use a wiki page to see a list of all the events going on around the world.

In Town Without My Car homepage – For background information, the plans throughout Britain and advice for both current and future participants.