Cyclists who take direct action against cycle thieves by booby trapping their bicycles risk prosecution themselves.

ilovemybike.co.uk has learned that a London cyclist frustrated by the high rate of cycle theft resorted to supplementing the security provided by a conventional lock by securing their bike with a length of hidden 500lb fishing line.

If the primary lock is smashed and the bicycle ridden off without permission, the line snaps taught and thief is thrown from the bike.

Other guerilla tactics being employed by cyclists in their quest to outwit thieves include:

No need for radical measures

But despite 10,000 bicycles being reported stolen each month, ilovemybike.co.uk believes there is no need for cyclists to adopt such radical measures.

Director at the Environmental Transport Association (ETA), Andrew Davis, said: “Illegal booby-trapped bicycles of this kind might appeal to the victims of theft, but luckily most cyclists realise that a good insurance policy will quickly arrange for a stolen bike to be replaced.”

Cycle insurance – how does yours compare? 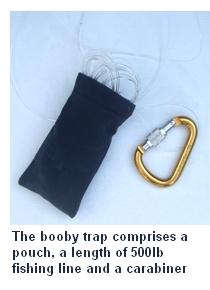