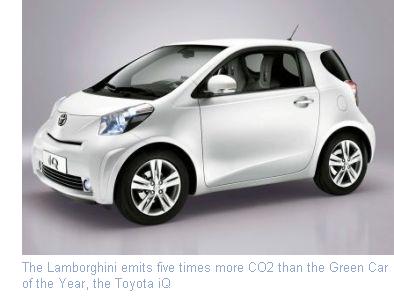 The Lamborghini Murcielago, a vehicle that over the course of a year emits an amount of CO2 equivalent to felling a football pitch-sized forest of trees, has been named the Least Green Car of the Year 2010 by the Environmental Transport Association (ETA).

The Lamborghini emits exactly five times more CO2 per kilometre than the car named Green Car of the Year, the 99g/km Toyota iQ. Over a year of driving, the Toyota emits CO2 equivalent to that absorbed by three tennis courts of forest.

The ETA examined over 5,000 models of car and compared their power, emissions, fuel efficiency and the amount of noise they produce to create a definitive guide to buying the greenest vehicle.

Andrew Davis, director at the ETA, said: “With emissions five times worse than the greenest car, the Lamborghini is the bull in an environmental china shop. Thankfully, there are very few on the roads and there is an increasing choice of environmentally-sound cars.”

“With the price of petrol at record levels and greater understanding about the threat to the environment there has never been a more important time to make fuel efficiency a deciding factor when choosing a car.”

Petrol prices have an obvious if not immediate effect on buying trends. However, the fact that current prices are set to stay will make frugal cars increasingly attractive.

Much has been written about the faltering popularity of 4×4 cars in urban areas, but whilst there is increased awareness about this type of vehicle having high emissions and posing more of a risk to pedestrians in the event of a collision, the move towards smaller cars by city drivers has as much to do with the passing of a fad as it does environmental enlightenment. The Mini, Fiat 500 and the Citroen DS3 are stimulating demanding for stylish, fuel efficient and lightweight city cars; vehicles that in general also happen to be kinder on the environment. A poll of 1,500 British drivers carried out by the ETA found that Scots were most inclined (42%) to buy a smaller car in order to reduce their motoring costs. The least inclined were drivers living in the north of England (34%).

Cars that use the most fuel and therefore emit higher levels of CO2 are now charged over £400 more VED (road tax) than the cleanest vehicles, a difference that will have an effect on buying trends, particularly on the secondhand car market.

Climate Change is one of the greatest environmental threats facing the world today. The carbon dioxide (CO2) found in the exhaust gas produced by petrol and diesel engines is not directly harmful to human health, but is the most significant of the greenhouse gases contributing to Climate Change. There is an increasing realisation that choosing a fuel efficient car can help reduce the amount of CO2 emissions for which we are responsible as individuals.

Increasingly tough emissions targets for car manufacturers are encouraging advances in green technology. The advent of diesel particulate filters (DPF) such as those fitted to some of the category winners heralds a dramatic improvement in the environmental rating of diesels. DPFs remove the soot in the diesel exhaust gases that is so detrimental to human health. Hybrid cars are increasingly available and will soon be joined by mass-produced pure electric cars such as the Nissan Leaf.