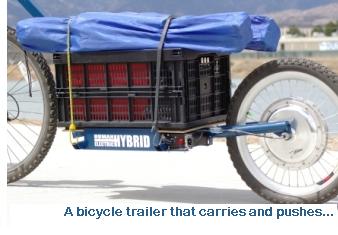 American cyclist and engineer, David Meyers was unable to find a trailer for his bicycle that would not weigh him down on hills, so he designed his own.

So successful was the electric bicycle trailer that Mr Meyers now offers build plans so that cyclists can build their own.

The Electric Powered Bicycle Push-Trailer uses a brushless hub-motor drive system that is widely available online to provide powered assistance for up to 25 miles on average terrain and at speeds of up to 30mph on flat paved surfaces.

A spokesperson for the Environmental Transport Association (ETA) said: “The top speed of the electric bicycle trailer would unfortunately render it illegal on British roads, but as a self-build project the power output could be restricted for a lower speed and extended range.” 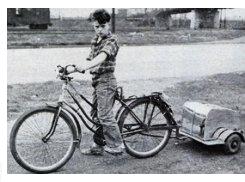 The idea of getting a little help with the pedalling is nothing new – the earliest motorcycles were bicycles fitted with tiny petrol engines. But the challenge of adding power to a bicycle without adding too much additional weight is something that still keeps the designers of today’s electric-assisted bikes busy.

One solution to the problem of a heavy motor is to carry it on a trailer and only hitch it when it is needed.

In 1948 this meant attaching a heavy (see right), but the electric hub motors of today are far more efficient.

Cycle insurance from the ETA includes new-for-old, cover for accidental damage, third party insurance, personal accident cover and if you breakdown, we will even come out and recover you and your bike. Covers electric bicycles, too.