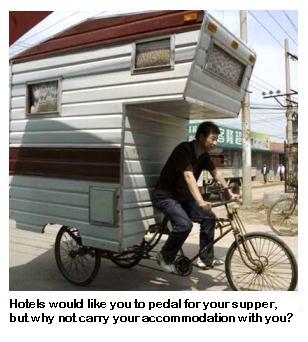 Energetic guests at a hotel in Copenhagen who generate electricity using an adapted exercise bike are to be rewarded with a free meal.

The Crowne Plaza Hotel, which already sports solar panels on its façade, aims to reduce its carbon footprint and help its guests to keep fit.

Guests wanting the £23 meal voucher will have to produce at least 10 watt-hours of electricity – an amount of energy that would power a light bulb for roughly 15 minutes.

It is expected that it would take a person of average fitness about 15 minutes to produce this amount of energy.

Cyclists usually power no more than a set of lights using pedal power, but a new type of dynamo can run any device that is designed to be plugged into a car’s cigarette lighter. It produces 100 watt-hours of energy, which is enough to power many appliances.

Which electrical appliances can be powered by a bicycle?

Cycle insurance from the ETA covers against theft, accidental damage and vandalism (including at race events) includes third insurance, a breakdown recovery service for cyclists and worldwide cover.