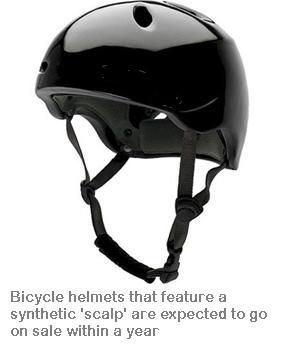 Bicycle helmets that feature a synthetic scalp to reduce the risk of rotational head injuries are to go on sale within a year.

Existing cycle helmets are little more than polystyrene encased in a plastic shell – working in a similar way to the skull by protecting against direct blows – but they are not designed to mitigate rotational injuries, which can prove fatal.

A new design of bicycle helmets that features a synthetic scalp to reduce the risk of rotational head injuries is to go on sale within a year.

When the British-designed Phillips Head Protection System is incorporated into a crash helmet design it behaves like a synthetic ‘scalp’.

When it is struck, the surface of the helmet moves in a similar way to the scalp sliding over the skull, thereby reducing the risk of serious rotational head injuries.

A conventional helmet is more inclined to ‘grip’ the surface that has been struck and cause the head and neck to twist.

According to Ken Phillips, the inventor of PHPS, cycle helmets featuring the new technology may be on sale within a year.

A spokesperson for the Environmental Transport Association (ETA) said: “This is a very interesting development in cycle helmet design and promises to make them far more effective, particularly for children.”

To wear or not to wear, that is the question

An increasing number of British cyclists wear helmets, but counter-intuitive as it seems, head injury rates have not decreased as one might expect. Furthermore, injury rates in countries where very few cyclists wear helmets are amongst the lowest in the world. There is much speculation over why this might be, but the statistics makes a strong arguement against any move to make helmet wearing mandatory until through research is undertaken.

For a detailed analysis of the arguments for and against helmet effectiveness
visit Cyclehelmets.org