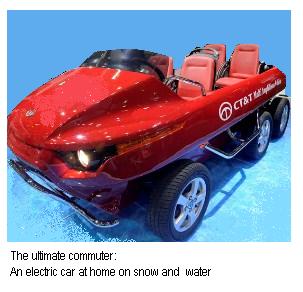 With snowy conditions on British roads a continuing challenge for many motorists, a Korean car manufacturer has this week launched an electric car designed to tackle most conditions on land and water.

CT&T is well placed to build the Multi Amphibious Vehicle – it claims to have more electric vehicle manufacturing capacity than any of its rivals.

The Multi Amphibious Vehicle has a modest top speed of 40mph on land and an estimated 10mph on water, but for many urban commuters this performance would suffice.

The vehicle’s six wheels are driven by an electric motor, as are the twin propellers it uses when on water.

Potential commuter, but it needs a roof

A spokesperson for the Environmental Transport Association (ETA) said: “If urban cars evolve into electric vehicles with the performance, weight and fuel efficiency similar to that of a golf buggy then the ability for a commuter to adapt their route to take in a river untroubled by traffic congestion, or to take to the roads in spite of snow, would be sensible – the one notable failing of the CT&T concept amphibious vehicle is the lack of any roof.”