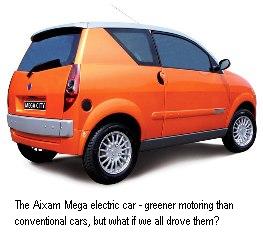 The idea that a wholesale switch to electric cars would automatically reduce CO2 emissions and dependence on oil is one of a number of myths dispelled by a major new report.

The report, ‘How to avoid an electric shock: Electric cars from hype to reality’ was conducted by the European lobby group Transport & Environment, an organisation co-founded and supported by the ETA.

The report found that whilst there were significant potential environmental benefits to be had from a switch to electric vehicles, these were wholly dependent on changes in the way electricity was generated, energy taxed and CO2 emissions regulated. Current EU legislation contains loopholes that are likely to lead to emissions and oil use going up.

How could electric cars ‘increase’ emissions?

Binding EU targets for car CO2 emissions agreed last December include ‘super credits’ that enable carmakers to sell up to 3.5 gas-guzzling SUVs for every electric vehicle they sell and still reach their official EU target. Electric cars are also counted as ‘zero emissions’ despite the fact that the electricity they use can come from high-carbon fossil fuels such as coal

The combined effect of these loopholes would be that carmakers that choose to market electric cars to meet EU targets would have to do less to reduce emissions of conventional cars. The overall effect would be higher CO2 emissions and oil use

Director at the Environmental Transport Association (ETA), Andrew Davis, said: “Whilst the report is not intended to dampen enthusiasm for electric vehicles, their introduction should not be viewed as a panacea; significant changes to the way we produce and tax power are needed before we will reap benefits.”

According to the report, the most certain way to promote electric-powered transport is to tighten long-term CO2 standards for cars to 80 g/km by 2020 and 60 g/km by 2025 whilst at the same time increasing fuel taxes. A lack of stringent CO2 standards removes the main incentive for motor industry to invest in electrification. Electric cars must be rewarded for their energy efficiency, not for moving emissions from exhaust pipes to power station chimneys.